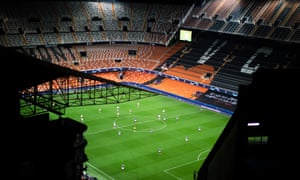 Valencia have announced that “around 35%” of their players and backroom staff have tested positive for coronavirus.
The La Liga club had reported on Sunday that five people involved with the first-team squad had contracted the virus, including defenders Ezequiel Garay and Eliaquim Mangala.
“Several further tests for the Covid-19 coronavirus among Valencia CF coaching staff and players have come back positive,” a new statement said on Monday.
“All cases are asymptomatic and those involved are currently isolated at home, receiving medical assessment and carrying out their scheduled training plan,” the statement added.
The statement also implied that Valencia’s participation in the Champions League first-leg tie against Atalanta, held in Milan’s San Siro, is linked to the high number of positive tests.
Valencia played the second leg of the tie behind closed doors at their Mestalla ground last Tuesday, having lost the first leg in Milan on 19 February, in front of a crowd in excess of 40,000 supporters.
The club said in their statement that they had taken “strict measures” after the game in “an area confirmed as ‘high risk’ by the Italian authorities days afterwards”. Those measures included “maintaining a distance between the squad and club employees and the general public.”
“These latest results show that the exposure inherent [at] such matches has caused a positive test rate of around 35%,” the club statement concluded.
On Sunday, Argentina defender Garay became the first La Liga player to confirm he has the virus, with former Manchester City centre-back Eliaquim Mangala later saying he had also tested positive.
“It’s clear that I have got off to the wrong start in 2020,” Garay said on Instagram. “I’ve tested positive for the coronavirus, I feel very good and now I just have to listen to the health authorities and for now remain isolated”.
The 33-year-old had already been ruled out for the remainder of the season after suffering a knee injury in February.
In line with most major sports worldwide, all organised football in Spain has been postponed for at least two weeks in a bid to prevent further spread of the virus. Spain is the second worst-affected country in Europe after Italy and, since Saturday, has been in partial lockdown as part of a 15-day state of emergency to combat the pandemic.